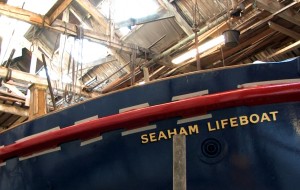 For over 14 months now we’ve been following the story of the restoration of the George Elmy lifeboat from Seaham.

The George Elmy was involved in a disaster in 1962 where, after carrying out an heroic rescue, was overcome by a gigantic wave leading to the loss of all but one person on board.

The boat then left the area and was eventually rediscovered in April 2009, converted into a fishing boat and laid up in Holyhead. The boat was bought by the East Durham Heritage Group and is currently being restored by master boat builder Fred Crowell of South Shields.

We’ve been producing Fred’s vlog of the restoration and are producing a DVD early next year of the entire story which will be sold from the George Elmy’s new home on Seaham Harbour.